Hi, I'm a freelance data reporter who covers state and metro government in Atlanta. I started as a print reporter.

Print bylines and some data work in places like McClatchy's Georgia papers, Creative Loafing, SaportaReport, and others.

Now I mainly do data visualizations, web-scraping and web apps. And good robots. For outlets like Atlanta Civic Circle and The Current.

Can I help you with something? 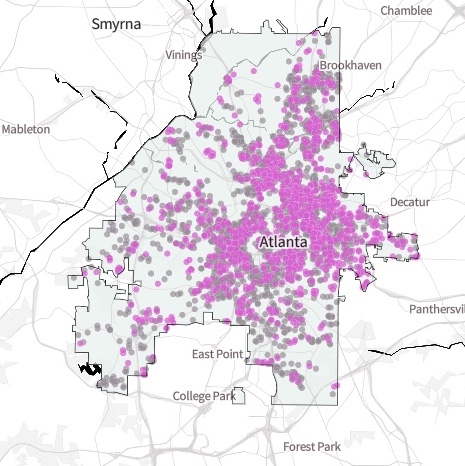 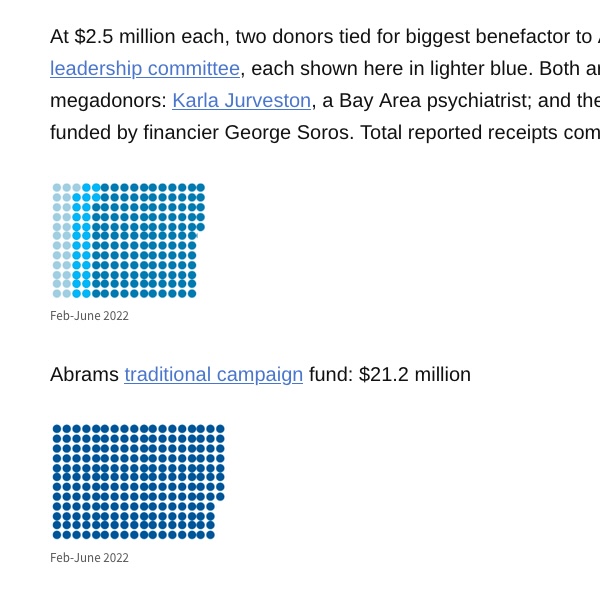 Experiment in visual storytelling in a tight CMS. Basically an icon bar graph with paragraphs between the bars. 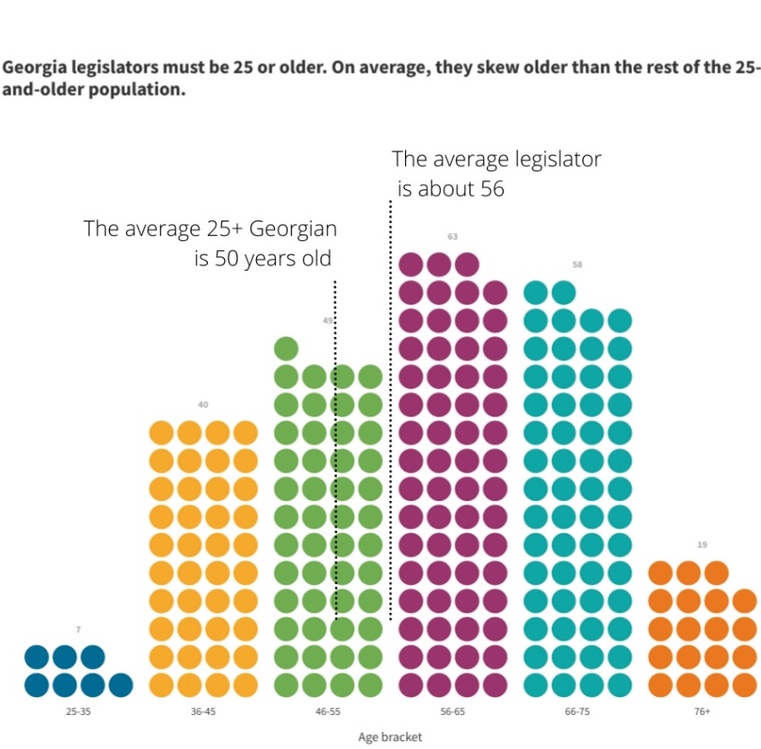 Georgia lawmakers are above average in age and wealth. Brings together several data sources and experiments with telling the story as a quiz.

Where Georgians live together and apart 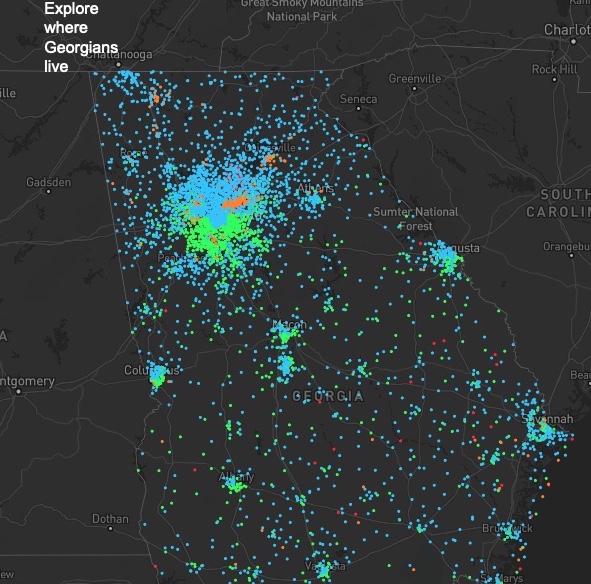 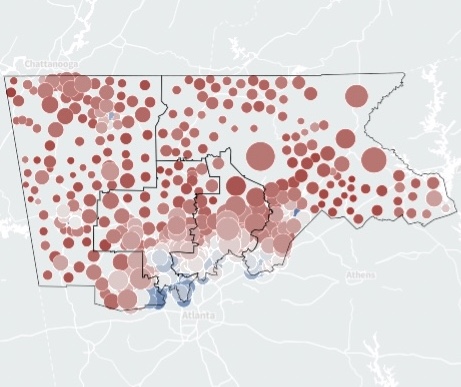 A purple state will probably send nine Republicans and five Democrats to the U.S. House because of new GOP-drawn districts. 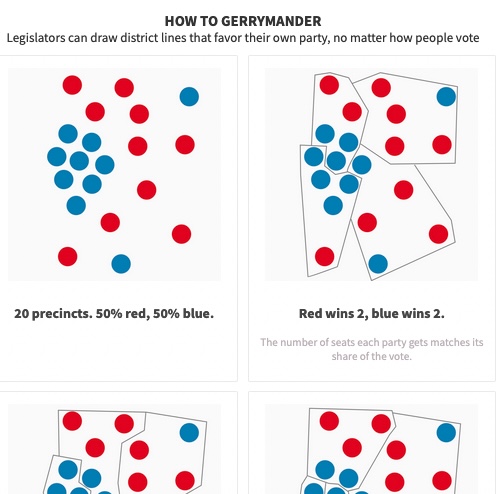 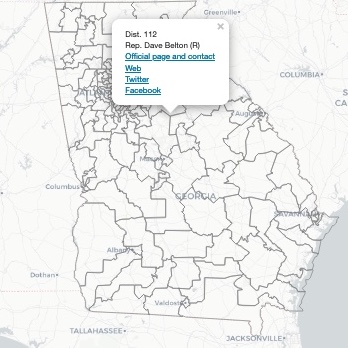 2020 crime in Buckhead versus the rest of Atlanta 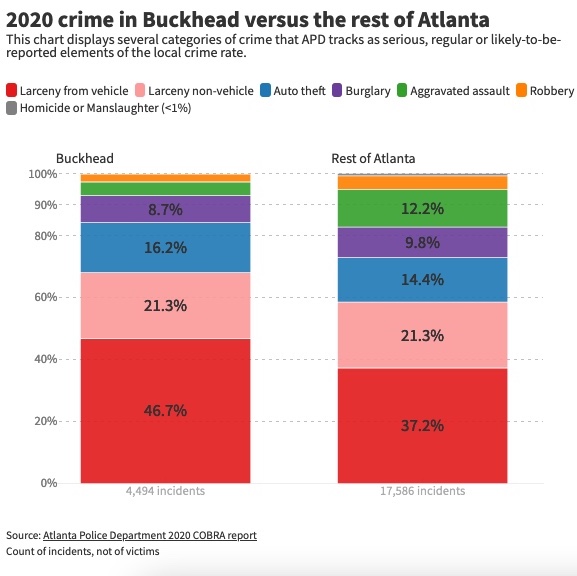 You need a chart to tell a story that has lots of numbers, like crime stats. That's doable in fairly little time with very little coding via Datawrapper, Flourish and other software. Great for any size publication. 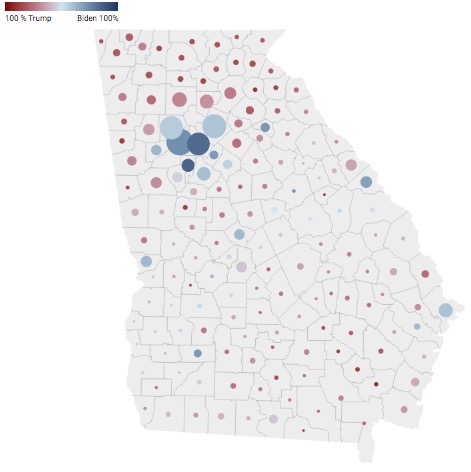 Map of election results and number of voters by county 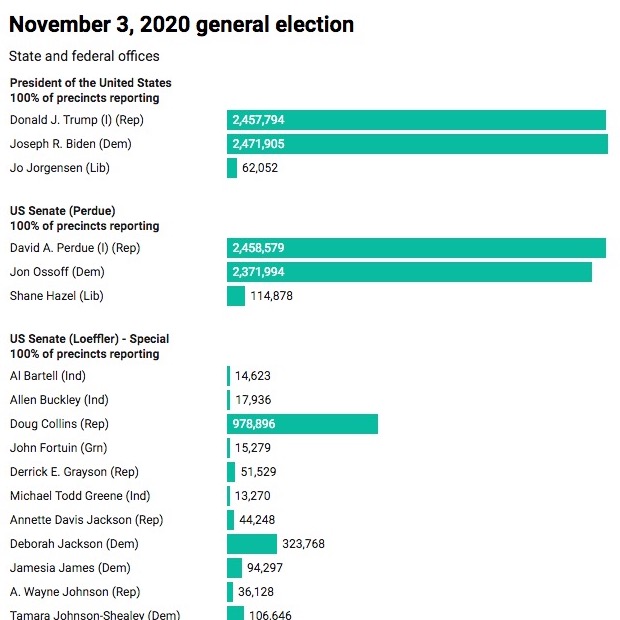 Live version at the Clayton Crescent 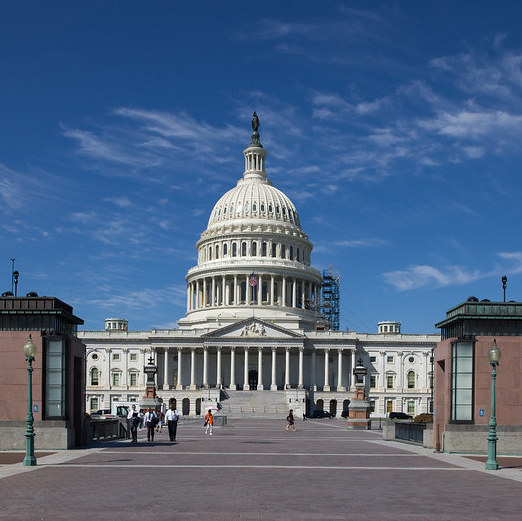 Read, search & sort all the tweets by Georgia's ~70 congressional candidates 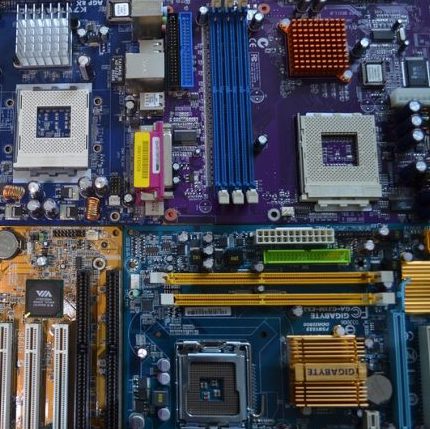 @GaPolBot monitors public Georgia and Atlanta public agency websites and RSS feeds and tweets what it finds.
Like, the governor's executive orders, Supreme Court of Georgia opinions and when new companies register to lobby in Georgia. 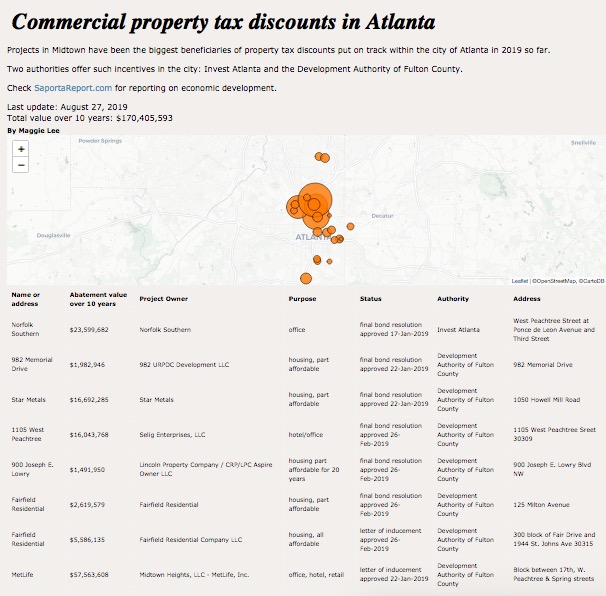 If Georgia's budget were $1 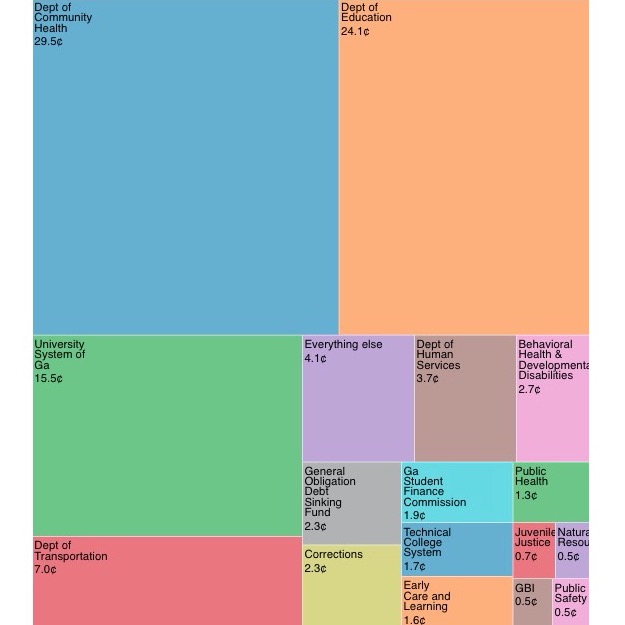 If Georgia's budget were $1, health care and education would get quarters. Most other things would get pennies

Why metro Atlanta's vote matters so much, in a map 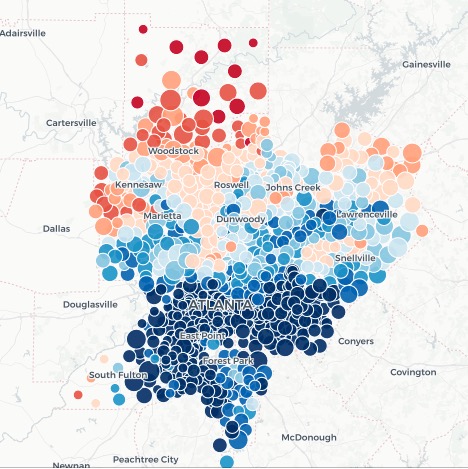 North Cherokee and south Fulton give some idea what other parts of the state are like compared to inner metro Atlanta: much redder but much less populous.

The Age of Atlanta 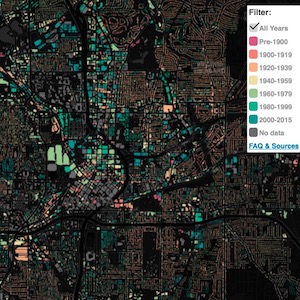 What would Bibb schools' racial makeup be if everyone went to their zoned school? 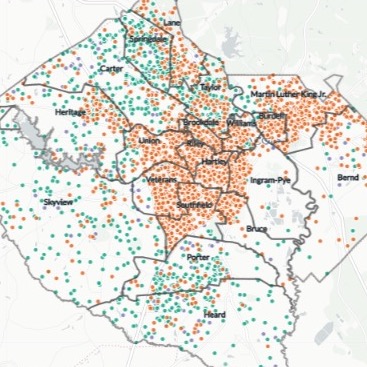 Maps for a series about public school re-segreation, done by Georgia Public Broadcasting and the Macon Telegraph.

With story for the Macon Telegraph (possible paywall)

Georgians squeeze into metro Atlanta. Here's how much: 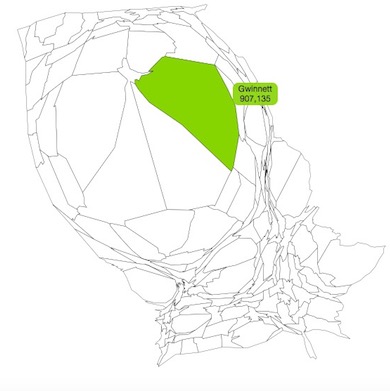 A personal project, just trying out a county map with the counties sized by 2016 population. 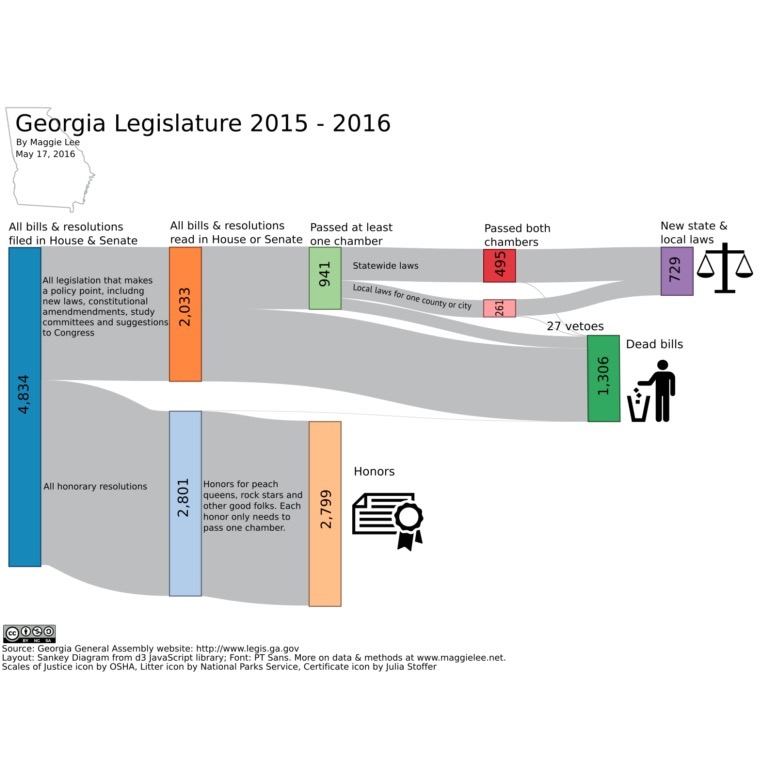 Another personal project, from 2016. I wanted to show what gets filed and handled in the Georgia Legislature. I wrote a little Python script to scrape, then categorize, these bills. D3.js did the heavy lifting on drawing the chart. It's finished and annotated in Photoshop.

About 26,000 refugees moved to Georgia in 10 years. Here's where most came from and went to in metro Atlanta

A chart created for the AJC in 2016, though that page has succumbed to link rot :(

Excel is for reporters, not just accountants

How to schedule a Python script in a piece of cloud, using an Amazon AWS EC2 instance (a tiny virtual server) and cron (a scheduler that is built into it.)